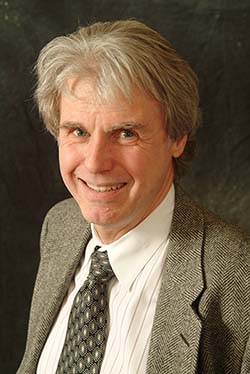 Hamlin Jennings, a pioneer in concrete science, passed away at the age of 68 on July 8, 2015 after a battle with cancer.

I met Hamlin during the “sulfate wars” in southern California in the late 1990s and he offered me a post-doctoral position at Northwestern University from 1999-2001. My interest in working with Hamlin was mainly because he pioneered the use of the scanning electron microscope (SEM) to study the microstructure of cement paste. As a budding concrete petrographer trying to understand how to best use the SEM to accurately and appropriately describe the behavior of concrete, his experience was invaluable.  During this time Hamlin was formalizing his brilliant model that applied concepts of colloidal chemistry to understand the microstructure of calcium silicate hydrate (C-S-H). His paper, A model for the microstructure of calcium silicate hydrate in cement paste  (Jennings, 2000, Cement and Concrete Research, v. 30, p. 101-116) is a landmark contribution. In my opinion, Hamlin was years ahead of his field and realized well before others that only a nanometer-scale approach would provide a true understanding of the C-S-H microstructure. He used nanotechnology to study C-S-H long before nano became the most fashionable buzzword in the business. In 2003 I coordinated a technical session for the American Concrete Institute Materials Science Committee  in Boston. Titled “Colloidal Aspects of Cement Paste”, attendance was somewhat sparse and although its impact was hard to gauge, Hamlin was non-plussed. After all, he was used to the lonely task of breaking new ground, having developed the first computer simulations of cement hydration years earlier when at NIST. Although that work was initially met with skepticism, it soon launched a whole new field of computational cement science that led to the development of NIST’s Virtual Cement and Concrete Testing Laboratory. Likewise, nano-anything seems all the rage now in concrete research and ACI has a very active Nanotechnology of Concrete Committee of over 50 voting members.

In later years, Hamlin continued to develop his colloidal model, updating it in 2008 with the paper “Refinement to colloid model of C-S-H in cement: CM-II” (Cement and Concrete Research, v. 38, p. 275-289). He returned to Massachusetts to become the inaugural director of the Concrete Sustainability Hub at MIT in 2010. The multi-disciplinary team of materials scientists, physicists, engineers and architects he helped put together there is a fitting legacy as they continue to push new frontiers in cement research.

More than anything, Hamlin was a great friend who had an amazing talent for bringing out the best in people. For a nice tribute from Hamlin’s former students and colleagues, follow this link.